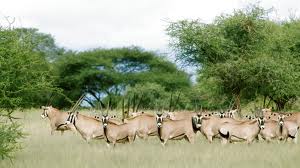 Tanzania 4 days safari to Ngorongoro via Manyara National Park is short but significant for wildlife adventure. Lake Manyara’s famous tree-climbing lions are another reason to pay this park a visit. The only kind of their species in the world, they make the ancient mahogany and elegant acacias their home during the rainy season, and are a well-known but rather rare feature of the northern park.

In addition to the lions, the national park is also home to the largest concentration of baboons anywhere in the world — a fact that makes for interesting game viewing of large families of the primates.

The package has been designed to include Ngorongoro Crater full day tour. Ngorongoro Crater is often called ‘Africa’s Eden’ and the ‘8th Natural Wonder of the World,’ a visit to the crater is a main draw card for tourists coming to Tanzania and a definite world-class attraction. Finally our clients will enjoy morning sunrise game drives at Tarangire National park – the home of concentration of elephants.

After taking your breakfast start your excursion from your Hotel/lodge in Arusha/Moshi early in the morning heading to Lake Manyara National Park. You will be served with picnic lunch while enjoying game drive.  Late in the afternoon start a drive to the world’s most visited destination – Ngorongoro Crater. Upon arrival at the Ngorongoro take your dinner and Overnight at a Lodge.

After breakfast, have a crater tour with your lunch boxes. The Ngorongoro crater is the world’s biggest whole volcanic caldera at 8300 sq km and is arguably the most stunning arena. It is frequently described as one of the wonders of the world, not only because of its geological magnificence, but also because it serves as an extraordinary natural sanctuary for some of Africa’s largest populations of large mammals. Enjoy your dinner and overnight at the lodge.

After breakfast drive to Tarangire National Park for game drive and later picnic lunch.  This park is spectacular in the dry season when many of the migratory wildlife species come back to the permanent waters of the Tarangire River. Huge herds of wildebeest, zebras, elephants, elands and Oryx gather to stay in Tarangire until the onset of the rain when they migrate again to good grazing areas. Afternoon game drive in Tarangire and overnight at a Lodge.

Early start a spectaculars sunrise game drive in the Park and later return for breakfast at a Lodge.  After taking your breakfast continue with game drive to be followed with lunch at the Lodge. While en-route to Arusha/Moshi stop at Meserani Snake Park for snake watching and shopping later you will be served with dinner and overnight at your hotel/lodge in Arusha/Moshi.