Arusha National Park is one of the Tanzania Tour destination. The park is located short distance from the tourist town of Arusha and Kilimanjaro International Airport (JRO). This park is featured with shallow alkaline Momella Lakes fed by underground streams (upon which rest thousands of lesser and greater flamingoes, and many migrant birds); the densely forested slopes of Mount Meru (one of the rewarding mountains to climb in Africa and where, among other animal species, live blue monkeys and beautiful black and white colobus monkeys exists). Birdlife in the forest is prolific, with many forest species more easily seen here than elsewhere on the tourist route.

While on Tanzania tour to Arusha National Park you will enjoy seeing various species of fauna and flora. Among the animals to been seen include the elephant, giraffe, buffalo, zebra, hippo, various antelopes, leopard and hyena. The park is 21 km from Arusha on the main Arusha – Moshi road. 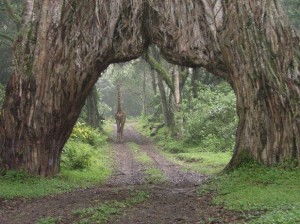 Nevertheless, a few roads require 4WD vehicles. Park Regulations Those driving around the park can do without a guide. But due to the danger posed by wild animals (especially buffaloes), those on foot must take an armed guide or ranger. The same is required before climbing Mount Meru. Guides and rangers can be hired from the park headquarters at momela.

Ngurdoto Crater is a volcanic crater found within Arusha National Park in  Tanzania. The crater is 3.6 km (2.2 mi) in diameter at its widest and 100 m (109 yrds) deep. Ngurdoto Crater is surrounded by forest whilst the crater floor is a swamo.

Driving and walking around the Ngurdoto Crater rim is allowed, but walking down to the crater floor is forbidden. Visitor facilities include camp sites, mountain huts, a rest house and a tourist lodge.