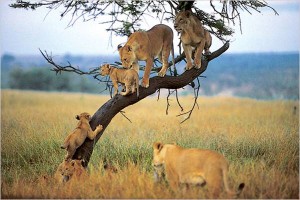 Lake Manyara National Park is located on the floor of the Great East African Rift Valley  and covering an area of 325 sq. km. The name Manyara comes from the Maasai  word “emanyara”, which is a “euphorbia” species of plant that is grown into a hedge around a family homestead.

This park is a flash of green amid an otherwise parched landscape. (In The Green Hills of Africa, Hemmingway describes the park’s magnificent hunting country.)

A line of springs support the lush vegetation of a groundwater forest, where blue monkeys, baboons and the curious-looking silvery-cheeked hornbill live.

Manyara provides the perfect introduction to Tanzania’s birdlife. More than 400 species have been recorded, the most profuse being the flamingo and even a first-time visitor to Africa might reasonably expect to observe 100 of these in one day. Highlights include thousands of pink-hued flamingos on their perpetual migration, as well as other large waterbirds such as pelicans, cormorants and storks.

With an entrance gate that doubles as an exit, the trail of Lake Manyara National Park is effectively a loop that can be traversed by jeep within a couple of hours that may be stretched to a few more at best, if driving slowly, to watch, observe and enjoy the diversity of flora and fauna. The Rift Valley escarpment forms a noteworthy landmark and provides a spectacular backdrop to Lake Manyara.

To the east of Lake Manyara lies the Kwakuchinja wildlife corridor. The corridor allows wildlife to migrate between dispersal areas and parks that include Tarangire National Park to the southeast, Lake Manyara to the west and the rift valley, Ngorongoro highlands and the Serengeti National Park to the north. Within the Kwakuchinja corridor are several villages that include Ol Tukai Village and Esilalei along the lakeshore. 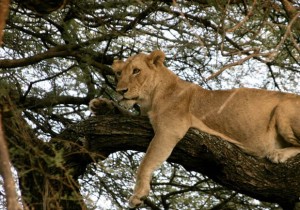 It is also home to large herds of buffalo, elephant, giraffe, leopard, civet, black rhino, hippo, zebra, impala, antelope, aardvark, the shy pangolin, bushbuck, waterbuck, and many others. It is also known for its hot springs and the famous tree-climbing lions that laze in the branches of the acacia trees. The park is ideal for a day trip enroute to Ngorongoro Crater, Serengeti National Park, Olduvai Gorge or Tarangire National Park.

The best time to visit is during the dry season – January to February, and June to September.

Four-wheel drive vehicles are recommended during the rains. Budget accommodation is available at Mto-wa-Mbu Village. There are designated campsites in and outside the park. Other facilities include a hotel, a hostel and self-catering bandas.

Getting there
By road, charter or scheduled flight from Arusha, en route to Serengeti National Park and Ngorongoro Crater.

What to do
Game drives, night game drives, canoeing when the water levels is sufficiently high.
Cultural tours, picnicking, bush lunch/dinner, mountain bike tours, abseiling and forest walks on the escarpment outside the park.

When to go
Dry season (July-October) for large mammals;
Wet season (November-June) for bird watching, the waterfalls and canoeing.